Escape sessions create laughter, fun and a highly unique experience that will be remembered around the office for a long time to come while giving companies the opportunity to practice and analyse their skills in communication, organization, critical thinking, logic and creative genius in a high pressure apocalyptic zombie survival scenario ….kind of like your office right? At the end of your session, we can facilitate a debrief session where our staff will analyse your moves, decisions, how you communicated and what you could have done to escape or possibly the reasons why you managed to escape quicker than other groups. 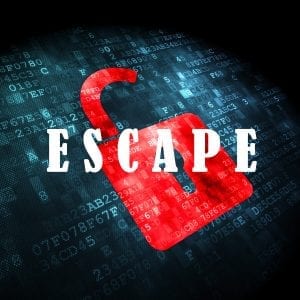 To succeed teams must:
COMMUNICATE – You won’t escape unless you share information. It isn’t simply good enough to just yell out something you found. That won’t yield the key! There is so much going on in the room that you must make sure that your idea is being heard and followed.
LEAD – Teams that do not escape do not have enough leaders in their group to suggest concepts, decide on path’s to follow or stir the group toward an outcome. It will take more than one strong leader to put everything together as there are multiple tasks that need to be completed simultaneously.
FOLLOW – Too many leaders in a group and no decisions will be made.
THINK OUTSIDE THE BOX – Your creative genius and speed by which you unleash it will be crucial to your team Escaping!
LISTEN – Everyone on your team is equal and could very easily hold the creative genius inside of them that is required to find the key.
WORK TOGETHER – Individualism is awesome! But it is a one way ticket to the belly of a zombie at this show.
ADMIT YOUR MISTAKES – There are multiple solutions for various puzzles in the room. If you are dead set on a solution simply because someone who you believed was “smart” gave you the answer, yet the answer doesn’t lead you further to finding more clues… then the “smart” person was wrong.
BELIEVE YOUR GROUP CAN ESCAPE! – With the time dwindling on the clock and a serious of what appear to be dead end clues, it will seem as if your fate is sealed. Those that do escape, have to practice positive thinking and never give up no matter how much time is left. The majority of groups that escape do so with seconds on the clock in a movie like scenario that yields ample amounts of adrenaline!
Call us today to participate in one of the most adrenaline packed team building sessions you’ll ever experience!
As a launch offer we are offering a 10% discount of Escape bookings in July, August and September.